As I’m on a culinary journey, it’s important to get to know ingredients from all around the world. Since I arrived in the US, I have tried so many products or items used in food, but still there are so many of them I haven’t tried them yet!

Is it sad that I haven’t tried even half of the products? No, it’s happy to look forward to seeing them in person and trying them!

Here is my new fruit I had never tried but did this summer! 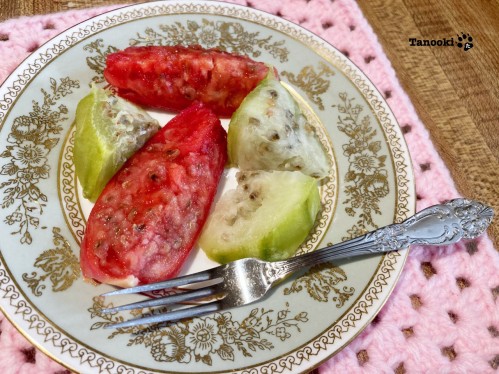 According to my research, they’re supposed to be a little familiar to me since cactus pear is a fruit of cactus that is green, flat, a little slimy produce I’ve tried as a topping of tacos or stakes. (well, actually that cactus was also a new face this year!)

How to eat:  Just cut them in your favorite way!

Gotta seeds? Yes. They are tiny yet hard!

How was the taste? : Sweet and yummy! I felt the red one was sweeter. The juice was coming out from the tip while they were waiting for someone to pick them up at the store. While the center part was sweet, the skin part was a little bitter with a slimy texture, just like the nopal part used for steaks. It was my first time to try, so I followed a simple way: just cut and eat! But I wonder, do people remove seeds? Although they were so tiny, they were super hard as a rock so I wondered if I should make an appointment to see a dentist hehe. But even if people recommend removing seeds, how do they do it? Since they are small and hiding inside of fruit, removing every seed must be time consuming…I bet if people bring them to my home country, they’d make seedless cactus pear in a decade:P

Anyways, I tried the newbie and was satisfied! Maybe I should make a smoothie to enjoy them better!